– Virtuoso Baroque music from the

lake of Constance region and Italy

The program wohlauf, wohlauf am Bodensee tells the story of the traveling musicians of the sixteenth and seventeenth centuries. Starting from Italy they went North in order to find their luck, carrying exciting new compositions and musicals styles in their luggage. On this voyage they crossed the Alps and often reached Southern Germany and the Lake of Constance region, where an interesting cultural exchange took place. The exciting cultural history of this region is represented in this concert by virtuoso music by Italian and German masters from the Renaissance and the Baroque period.

The instrumental ensemble Parnassus Collective was founded in Den Haag in the environment of the Koninklijk Conservatorium, one of the world’s leading institutes on historical performance practice. In their work this international group focuses on the interpretation of instrumental music from the Renaissance and the Baroque using (copies of) original instruments from the period. The sonic world of centuries ago is being transported into the concert hall of today by these young virtuoso musicians – full of color and expressivity.

Nadine Henrichs – born in Hannover – received her first violin lessons at the age of 11. After finishing secondary school, she went to the Musikhochschule in Münster to study modern violin with Prof. Martin Dehning. In 2008, Nadine finished her postgraduate studies with a performance diploma and moved to Bremen, where she started her studies of the baroque violin at the Hochschule für Künste with Prof. Thomas Albert receiving her diploma in 2012. In Autumn of the same year she moved to the Musikhochschule Nürnberg to study ‘classical’ violin with Anne Röhrig. Furthermore she attended masterclasses with Mira Glodeanu, Veronika Skuplik, Anton Steck and Sirkka-Liisa Kaakinen and followed lessons with Shunske Sato, Markus Hoffmann and Jane Rogers. Henrichs was a member of the EUBO (European Union Baroque Orchestra) in 2012 and the Ambronay European Baroque Academy 2013 performing L’Orfeo by Claudio Monteverdi under the direction of  Leonardo García Alarcón.

Henrichs plays in ensembles like Ensemble Odyssee Amsterdam, Luthers Bach Ensemble Groningen, Holland Baroque, Concerto Köln and the Freiburger Barockorchester. She is also the leader her own ensemble Unitate Melos and a co-founder of the Parnassus Collective.

Nicholas Emmerson began playing baroque trumpet during his undergraduate studies at Newcastle University and Montréal’s McGill University. He was awarded the David Barlow Memorial Prize from Newcastle and graduated with honours in 2005. He began graduate studies with Susan Williams (Royal Conservatory of The Hague), was a Huygens scholarship recipient and received a distinction on completing his Master in 2010. After being introduced to the cornetto and subsequently becoming fascinated by this instrument, in 2012 he began taking lessons with cornettist Marleen Leicher (Antwerp) and later as a student of Gebhard David (Hochschule für Kunst Bremen). During the course of his studies Emmerson won auditions for a number of academies, most notably performing in William Christie’s production of Purcell’s Fairy Queen at the Académie Européenne de Musique d’Aix-en-Provence. In addition to this he has taken lessons and followed masterclasses with Ute Hartwich and Jean-François Madeuf on trumpet, as well as on cornetto with Bork-Frithjof Smith, Jean Tubéry and William Dongois.

Santiago Casalta was born in Nules (Spain) in 1983, where he started his studies of the trombone when he was 7 years old. In 2002 he continued his studies of the modern trombone in Barcelona and later on in Rotterdam. He was awarded several prizes in competitions such as III Concurs de Joves Interprets Vila de Betxí 2001, of the Spanish ministery of culture and the Premis Ibercaja 2008, as well as a scholarship by the Institut Valencia de la Musica in his native Spain. In the past years he has followed his interest in historical performance practice and – under the guidance of Charles Toet – obtained his Master’s degree for baroque trombone at the Royal Conservatory in The Hague in 2015.

Casalta appears regularly in baroque orchestras and ensembles in the Netherlands, such as Concerto Amsterdam or Copper & Zink and has performed in early music festivals such as Utrecht Oude Muziek (NL) and the Festival Musicale Estense (IT). Currently he is engaged in various orchestras and ensembles in the Netherlands and beyond, performing music from the 16th century up to contemporary compositions.

Inga Maria Klaucke studied recorder and historical bassoons at the Universität der Künste Berlin, the Royal Academy of Music London, and as member of the Jeune Orchestre Atlantique in Saintes, France, with Christoph Huntgeburth, Daniel Brüggen, Andrew Watts, Alberto Grazzi, Donna Agrell, and Jane Gower. In 2012 she obtained her ‘Konzertexamen’ on recorder with distinction, and afterwards rounded off her comprehensive studies with a Master in historical bassoons with Benny Aghassi at the Conservatorium van Amsterdam.

Maximilian Ehrhardt studied the modern harp with Erika Waardenburg at the Conservatorium van Amsterdam, from where he graduated in 2009 with the Master’s Degree with distinctions. In 2008 he started simultaneously his studies of historical harps with Mara Galassi at the Accademia Internazionale della Musica di Milano, graduating with the Master’s Degree in 2015 – again with the highest marks. In 2013 he won the audition to perform the harp solo in Monteverdi’s ‘Orfeo’ during the 20th European Baroque Academy of Ambronay.

He worked as solo-harpist and continuo player with ensembles such as the Orchestre Philharmonique du Luxembourg, the orchestra of the Komische Oper Berlin, the Gürzenich-Orchester of the Cologne Opera, the orchestra of the Fynske Opera (Denmark), the Neue Düsseldorfer Hofmusik (Düsseldorf opera), the Lautten Compagney and the Choeur de Chambre de Namur. His performances include collaborations with Sylvain Cambreling, Konrad Junghänel, Lorenzo Ghielmi and Leonardo García Alarcón. Maximilian has played concerts in the Early Music Festivals of Berlin, Utrecht, Ambronay and Namur, as well as the Festival della Valle d’Itria and the MITO Settembre Musica Festival in Milan. He is a founding member of the ensemble L’Aura Rilucente, with whom he has won several competitions and performs internationally. The ensemble published a CD with the Ambronay label (Harmonia Mundi) in 2015. Next to numerous other CD-recordings, Ehrhardt has performed live on Radio Rai3, Concertzender Nederland, Bayerischer Rundfunk and France Musique.

Edoardo Valorz is harpsichordist and organist. Born in Italy, he studied organ with Wijnand van de Pol. After his classical studies he attended musicological courses and studied harpsichord with Patrizia Marisaldi in Vicenza (BA). He received the BA and MA degrees at the Royal Conservatory in The Hague, as a student of Ton Koopman and Tini Mathot for the harpsichord, and of Patrick Ayrton for basso continuo.

As a soloist and continuo player he performed, on organ and on harpsichord, in several early music festivals (Utrecht Oude Muziek and Seoul Early Music Festival, Itineraire Baroque, Antiqua Festival among others), and with baroque orchestras and ensembles, such as Amsterdam Baroque Orchestra, Symphonie Atlantique, Northern Consort, and Concordi Musici. He played under the direction of leading conductors such as Ton Koopman, Christopher Hogwood, Bart Kuijken, Peter van Heygen and Alfredo Bernardini. Valorz was awarded in 2007 at the Pesaro Harpsichord Competition G. Gambi for his continuo playing. He is co-founder of the ensemble l’Arco Sonoro on period instruments. Next to being a PhD student at Leiden University and Orpheus Instituut Gent he teaches since 2014 “Historical Development of the Harpsichord” at the Royal Conservatory in The Hague.

Meingosus Gaelle was born in 1752 in Tettnang and entered at the age of seventeen as a monk into the monastery of Weingarten. After several study years in Salzburg he returned to Weingarten in 1777 where he held different monastic positions until the secularization of the monastery. In 1804 Gaelle entered the university of Salzburg as a professor for dogmatics and church history. He took over the position of superior in the pilgrimage town of Maria Plain in 1811, which he held until his death in 1816. Gaelle’s body of work includes several hundred own compositions and arrangements of works of contemporary composers and therefor offers a unique view into the monastic music culture of the late eighteenth and early nineteenth century. Masumi Nagasawa presents in this program works in which Gaelle’s instrument of choice – the harp – takes a central position. Next to solo works for the harp, duos by Gaelle and his contemporaries will be performed. 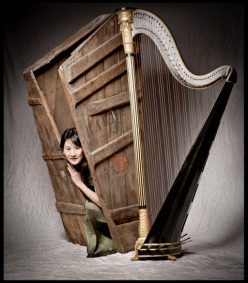 She currently teaches at the Conservatory in Maastricht. She is also completing her PhD at Leeds University in England under Professor Clive Brown on Single-action pedal harp and their implications for the performing practice of its repertoire from 1760 to 1830.

Dutch–Italian Cecilia Bernardini is widely considered to be one of the most versatile violinists of her generation, performing on both modern and baroque violin.

As a soloist, Cecilia has performed in many of Europe’s most prestigious concert halls, including the Concertgebouw Amsterdam, Musikverein Vienna, Konzerthaus Berlin and Wigmore Hall, playing much of the romantic and baroque concerto repertoire. In 2010 she performed the solo part at the world première of Philip Glass’s Double Concerto for Violin, Cello and Orchestra with the Residentie Orkest. Cecilia frequently leads and directs modern and period instrument ensembles including Ensemble Zefiro, Scottish Chamber Orchestra with Robin Ticciati (including the Edinburgh International Festival), Camerata Salzburg (including the Linz Brucknerhaus and the Salzburg Festival), Arcangelo with Jonathan Cohen (recordings for Hyperion), The King’s Consort, Holland Baroque Society, Bach Collegium Japan, Tafelmusik Baroque Orchestra, Swedish Radio Symphony Orchestra, Ensemble Pygmalion with Raphael Pichon and The Netherlands Bachvereniging. In 2012 Cecilia was appointed leader of the Dunedin Consort (John Butt). She features regularly as a soloist and appears on their critically acclaimed recordings. A keen chamber musician, Cecilia regularly performs with her father, baroque oboist Alfredo Bernardini and is a member of the Serafino String Trio.

Cecilia plays on a 1743 Camillus Camilli violin kindly loaned by the Jumpstart Foundation.